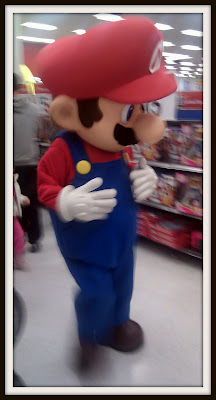 Today Melissa and I headed out to square one to do some Christmas shopping. Shortly after we got there I sorta wished we had brought the kids… Well at least Jacob, because who did I see walking through Wal-Mart, none other than Jacob’s favorite character Mario. I had to take a picture to show Jacob who we saw. I hadn’t intended it to be the Picture of the day, but after a long day fighting the crowds in the malls I wasn’t up to taking another.

Before I wrap up for the night I thought I should say a few words about how much Jacob loves Mario. For the last 3 months or so he’s been obsessed with Mario 64 DS. He plays it all the time, and  when he’s not playing it he watches video’s on YouTube of other people playing it.  When we were shopping the other day he got so excited to see Mario and friend figurines. He would have love to take his picture with Mario today, that is if he could get past his fear of people dressed in kids character costumes.