A couple of weeks ago I had a tragic accident with my phone. It slipped from my pocket at the pool and landed on the hard ceramic floor, cracking the screen. It was a tragic event, specially considering the phone is less than a year old and that kind of damage isn’t covered. I tried to go back to the borrowed nexus one, but it stopped charging shortly after I started using it. So I’m let with a phone with a broken screen. Some of you might be wondering why I didn’t subscribe to the device protection plan from my Carrier. Well that’s $7 a month and I would still have to pay $150 to replace my phone. Over the course of the 3 year contract that’s $252. I’ve been quoted around $170 to repair my phone from 2 different shops.  So I have no regrets with my Choice, just a dilemma of what to do next. 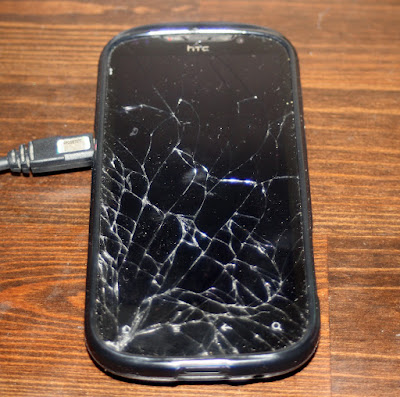 Before going into my dilemma I thought I would talk about my phone a little, to give some context to my decision. Before starting I looked back and was surprised to see that I haven’t really written about my new phone Sure there was my POD on the day I bought my phone and a Post about waiting for the Ice Cream sandwich update I haven’t really written about my latest phone. So I find myself a little torn. Do I want to do a write-up on my broken phone? 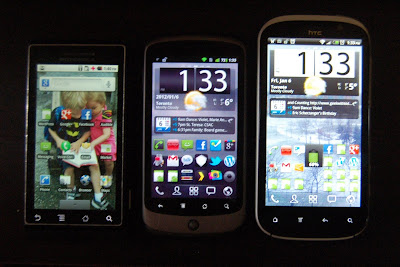 Thinking it through I thought I’d talk about the Android experience and how it’s evolved for me over the 3 handsets I’ve used in the last 2.5 years. My first Android phone what the Motorola Milestone (You can read my first thoughts about it here ). I followed that with a loner Nexus One which I loved but it had some hardware issues. So at the beginning of this year I upgraded to the HTC Amaze ( http://www.geekwithkids.com/general/pod-a-new-toy-for-daddy ). Between the 3 phones I’ve seen Android version 2.1, 2.2, 2.3 and 4.0.

The Milestone and Nexus One were from the same generations of smart phone and had very similar specs, though I loved the hardware keyboard on the Milestone. The nexus one was unlocked and let me explore the world of custom roms a bit. The one thing that both phones suffered from was limited space for your apps. What’s a smart phone without access to apps? Between that and hardware issues on the Nexus One, it was only a mater of finding a phone that I liked with a prices that didn’t back the bank. Back in January that was the HTC Amaze. It’s been a good phone. I’m not completely happy with some of the customizations that HTC has chosen to add to their Android experience, but it’s got a great camera and works well for me.

It’s clear that Android has evolved a lot in the last 3 years, and I haven’t even had a chance to experience the latest version of Jelly Bean.  The one thing that struck me as I moved to the HTC Amaze’s version of Ice Cream Sandwich (Android 4.0) was how much of the features were present in Cyanogenmod 7 that I was running on the Nexus One. It show how good the community versions of Android Really are and before the accident I was looking forward to trying a CyanogenMod 10  on my device once I’d unlocked it.

But now that’s not to be. I’m left with the question do I fix my phone? Do I replace it with a full price handset? Or maybe try to find a deal on a used Handset? When it first broke my phone I was sure I would get it repaired, but $180 is a lot of money and it’s surprisingly functional, if hard to read at times. So I’m left pondering, the new Nexus 4 is around $300 from google with no contract or commitments, sure it’s almost double the cost of fixing this one, but it’s a brand new phone that will always be running the latest android. That makes it very attractive. Then there is the Nexus 7, at Around $200 it’s an Android tablet which would give me a great interface for the Android apps I love and help solve my battery issues by separating my phone from my apps.

Recently a dark horse has entered the competition, perhaps I want a Windows Phone 8, like the HTC 8x or even a Windows 8 Tablet would offer better capabilities going forward. The problem is I just don’t know what the best choice is, or which best fits with the family budget. For now I’ll use a broken phone and you can be sure that when I do make a change, either by replacing my phone or supplementing it with Tablet I will write about it here.