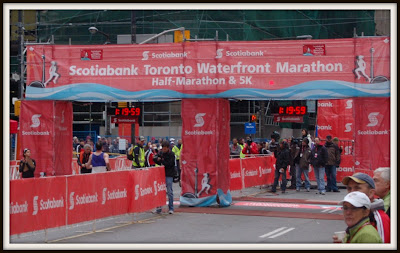 Sunday I took to the streets to compete in my second Half Marathon. The weather was nice and cool, and thankfully the rain held off. Running through the downtown and along the waterfront gave the race a feel of familiarity that I didn’t have during the mm. though having not really looked at the route before I did have a few surprises along the way. Finishing in the heart of the Financial district
. It was also great to finish the race in the heart of the city.

going into the race I was confident that my training would propel me to a quicker finish then last time, unfortunately it didn’t work out that way. I finished on 2:12:55 more than two minutes slower than in Mississauga. It has me wondering if I didn’t do enough training leading up to the event or if that it was a ‘flat’ course cost me the time. Mississauga was a downhill course, and I think I didn’t appetite how much a help that was. Of course RunKeeper reported that I set a personal record for ‘Biggest elevation climb’ during the run makes me question how flat it really was.

I know it was probably a mixture of the two but considering how sore I still am today, 2 days after the run, I might have to put more blame on training. Usually after a long run I like to follow-up the next day with a short run, but last night I just wasn’t up to it. So I think regardless how sore I am I will have to get out to-night. Probably just for a slow 5 or 6 km. I need to continue with the focus I found when I sat down at the end of September and planned my training for the last two Weeks before the race. At the time I set out an ambitious schedule, one that I followed for the first week but pulled back from a bit the second week. But one I think that was good for me.  As I ran on Sunday I kept thinking I really needed to stay that focused on my training, not just on the races.

I really liked having my planned runs spelled out for me, being able and look back at what I had recently run and what I was about to run was good motivator. So I think once I figure out what I will be doing with my training I will continue that, though perhaps I should look at adding some automation to the process. It was a pain to manually update the list after each run.

Looking forward:
Now its time to look forward to the future and my ultimate goal of running a full marathon. The first step forward is getting a training schedule that I can stick to as the weather continues to get colder.  But for the plan to be effective I need to set a date for my Full Marathon and then work backwards from there to choice my races and then weave a training schedule between them. I need to train for races, but I need to remember that the train is as important, if not more important than the real races.

I want to run my Marathon next year, but I’ve been waffling between a fall and a spring date. Before the race on Sunday I was leaning more to fall than spring. I think it would be easier to train during the summer than during the cold of winter. Though after ruining this last marathon slower than the first I think the down hill of the spring Mississauga marathon might be a better choice. Then third option presents itself, hold off on a full marathon till I get the half in under 2 hours. So as I write this I find I have more questions than answers.

So while I still try to nail down when to run the full 42.2 kms of a marathon, I took a little while to look at some of the race options I have for the coming year. I have put together two schedules of races I might run

Following the races I ran this year I’m looking at 3 or 4 races. Holding off on deciding if I’m ready for a full marathon in the fall till after running the Mississauga Marathon in may:

This is a more ambitious plan, it says why wait. Lets go for the gold. Lets add a 30k race in March and got for a Full Marathon in Mississauga.

These are just Ideas that I thought I’d put out there, see if anyone have any thoughts?