Today I am bringing back my Fitness Friday posts. Its part of an increased focus on running and eating healthier. I’ve wanted to start these up for a while, but I was waiting until I was confident in my new running plan. Each week I’ll include  a running total of this current months running totals.  I’m going to start this series up again by looking  at some dates in the past that have been important to my running, and then look to the future and see what dates are coming up.

May 2 2010: First Run (3.17k – 33:54)
This is the day that started it all, Melissa and I headed out to do day one of the couch to 5 k program. Melissa ran with me a few times in the beginning before deciding running wasn’t for her (I’m happy to say she’s giving it a second shot now).  I followed the program for 5 weeks before starting to find my own way. I continued to have minute long walks, but I increased the time I was running until I was consistently Running for 10 and walking for 1.

April 2 2011: Harry’s Spring Run-Off 5k (29:34)
I had a great first summer of running, but when winter hit the weather slowed me down, followed by a knee injury. So come spring I was looking for ways to get back into running. I signed up for 3 races to motivate me to stick with it, this was the first.It felt great to get out there and go for a challenge. My first run was great, even with the crazy hill at the end. I kept my time under 30 minutes, and couldn’t wait for my next race. May 1 2012:  Sporting Life 10k (57:18)
My second official race, it was down Younge street, and Danny and I ran it together. Finishing a second apart. It was a great run, and really pumped me up for my first Marathon. I was sad when scheduling conflicts prevented me from running it this year.

May 15 2011: Mississauga (Half-)Marathon (2:10:32)
The last challenge I had set for myself that spring, a half Marathon. I remember running the Half Marathon distance the week before the sporting life 10k and then again a week before the Marathon. I did the first one because I wanted to know I could run the distance. I did the second because I was just excited, and wanted race day to get here. It’s a great feeling to know that I can complete a half-marathon. Race day was crazy, I still remember being about a km from the finish and the lead marathon runner past me. It was a bit of a blow that he could run a Marathon faster than I could run the half. Of course it wasn’t till months later that I realized that he finished  over 2:25 minutes so, at least he didn’t lap me.

June 5 2011: Sunday Run (22.45km – 2:46:08)
I was training hard and not thinking, I headed out for my Sunday long run at 11:30am and ran for 2 hours and 45 minutes. The temperature was around 26 degrees celsius. It took me a couple of days to recover from that run, and it was 9 days before I headed out for a run again. Though I ran through the summer, I lost some of the drive and didn’t do more then 15km again till middle of August.

October 10 2011: Toronto Waterfront (Half-)Marathon (2:12:55)
The first race that I found myself lining up at the starting blocks alone. It was a harder course then the Mississauga marathon, and truth be told I didn’t train enough for it. Still I was happy to be just over 2 minutes slower than my first half marathon pace. I also managed to race money for a good cause, so it was a great day. 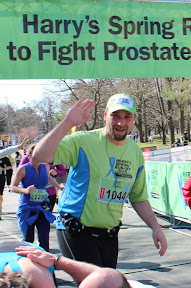 April 7 2012: Harry’s Spring Run-Off 8k (54:46)
My second time running Harry’s Spring run, though this year I entered the 8k instead of the 5k. It should have been a great race,  we had a very mild winter with hardly any snow,  I should have been able to train all winter and be ready for the spring events.  The problem is I didn’t train all winter.  I ran occasionally never more the twice a week.  I signed up for Harry Rosen thinking having an event booked would help get me motivated. It failed.  I ran more but not enough and on race day it was reflected in my time.

My finish time was 54 minutes and 46 seconds,  my goal was to be under 45 minutes. I would have been happy with under 50. I was not happy with 54:46. I found myself questioning my running.  In my mind I had two  options,  the first was to give up running,  the second was to  embrace what I’ve thought about since I ran my first half marathon last year and that was the to run a full marathon.  It wasn’t an easy decision,  if I want to run a marathon I have to run 40 to 60 a week. That means running 4 times a week.

May 2 2012: Second anniversary
The second anniversary of my beginning to run, this year it had some added to significance . The first was that during my run on the second I crossed the 1500 kilometers run.  Second is that it’s the day I began putting my renewed focus on running to the test.  A renewed focus that should see me celebrating my 36th birthday by running my first full marathon.  This means that from now till my birthday the goal is to run 4 times a week.  That will work out to runs between 6k and 10k three nights a week , and a long run on Sundays. For May I’m focusing on getting out there and running, trying to get my distance up, once I’m running close to 40km a week, I’ll look at working on my speed.

What follows is the three runs that I’m committing to for me. They aren’t about anything other than my desire to be a runner.  I hope to add a the 5k Zoo run in September, that Melissa and I will run together.

October 14 2012: Toronto Waterfront (Half-)Marathon
Once Again I will run the Waterfront Marathon, my dream is to run it in under 2 hours, my goal is to do it in under 2:10.

March 24 2013: Around the Bay 30K Road Race
I see this as a great warm up for my full Marathon in May, plus the route just looks like itll be great fun.

May 5 2013: Mississauga To celebrate turning 36, I will run my first complete marathon, I’m not even going to think about times this far out. We’ll see what I think after I have a few 30k runs under my belt.