Last week I talked about import dates for my running,  today I thought I’d talk about the other activities I plan to do this summer to help me get fit.  My running is a solo thing,  though I hope that Melissa will join me more often In the months to come.  I would also be thrilled if Jacob,  who ran the kids run at the Harry Rosen Spring Run-Off would be able to join me in the future.  But for now running is me time and I don’t think I can find much more of it to do finesse activities so the rest of what I hope to do involves the family. 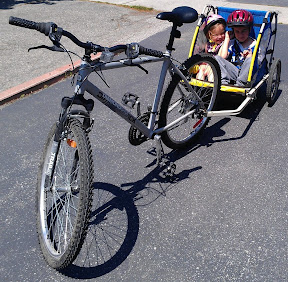 This has already become a regular family activity, starting with two family rides over the may 24, the second included a picnic. I am really looking forward to seeing how far we can ride as a family. Of course this is only possible be cause we bought the bike trailer when Jacob was a baby. This will probably be the last summer that both kids fit in it so I’m hoping to get Jacob’s cycling to the point where he can cycle along instead of riding.

One of the best parts of it is even on weekends where Melissa has to work we’re able to have a family outing, with a picnic before she heads to her afternoon shift. My goal by the end of the summer is to have a family day on the islands, we can ride our bikes there and back. What I’m not sure is how long before Jacob will be able to ride along on his own bike. That’s something I think we should start working on it after his birthday.

Swimming
The kids swim all year round as both take in weekly classes.  Until we discovered the local outdoor pool last summer I only swam in vacation.  As a family we went swimming 2 or 3 times a week last summer and hope to go even more this summer. I foresee plenty of evenings this summer where we head down to the pool for a swim then return home for BBQ.

I have never been a strong swimmer but the more I watch the kids learning to love the water the more I find myself wishing I could swim better. It really hit me in Florida while I was swimming in the ocean, I started to think how much more fun it would be if I could swim. The my mind took it further, if I could swim i could try doing a Triathlon. Thinking about that appealed to me. It’s not the first time I’ve thought about a Triathlon, the first time I was a kid, probably around 12 and I went a Triathlon near sunny side, I remember talking to someone at the time thinking I could do the Cycling stage, but the other two were beyond me. The next time I thought about the triathlon was talking to Danny, who wants to complete one. It was after I was running so I figured I could complete two legs, of the Triathlon, I’m not sure if I said I’d never be able to do the swimming leg or not, but I’m sure I thought it. Now I find myself thinking it might be a fun challenge to set for myself. If I can learn to swim well enough that is, maybe I should look to see if they offer adult classes….

Running Update:
I started last week’s post with a summary of my running in may, I had planned on including it each week,  but as I explore other topics I don’t want it to over shadow them,  so instead I think I will do it at the end of my posts. I am still working out how I want to present the update, I am thinking about doing the run of the week, or maybe my quest for 2000km, I’m just not sure, for this week I thought I’d put May’s running in context of the running I’ve done this year. My 8km run Wednesday night put my month total at 150.4km that’s the third highest I gave ever recorded in a single month and just above the total for my total distance for the first four months of the year. So now I need to take that distance and build on it, and most importantly work on increasing my pace.