I upgraded to Windows 8 the first moment I could, with the low upgrade cost and new UI it was a no brainier. I like where Microsoft is going with windows. Sure I have some concerns but I think Windows 8 provides a better experience  even on a desktop, then windows 7. So today I’m starting a new series of posts with a focus on windows 8 and it’s new metro style apps. Each week I’ll write about a feature of windows or an application. I had planned on writing up about the simple upgrade process for windows out, but I didn’t get any screen shots while I upgraded my system, so instead I’ve decided to share my thoughts on Windows 8 and the direction Microsoft is taking with it’s monopolistic OS. 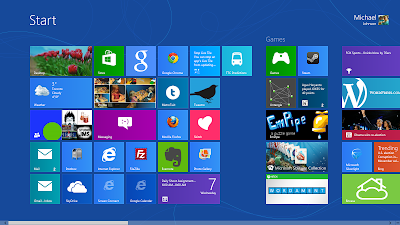 2 weeks ago Microsoft released the latest version of windows, and it’s a game changer. Well it’s their attempt at a game changer. It is a bold step towards what seems the be the future of computing. The growth  of IOS and Touch centric devices shows that for most people computers are too hard. They want simpler, easier to understand devices. They don’t want the full-blown complexity of the a Windows 7 or even OS X. There are people who prefer it, but for most people they use it because that’s there only choice to do the what they need to get done. When they can get it done without it the do. With the iPad apple has shown the masses that computers don’t need to be hard to get the job done.

Microsoft saw this and were scared, they had built touch into windows 7 trying to get their partners to build Windows 7 based tables, that could be sold as an alternative to the iPad, but they weren’t an alternative. Windows doesn’t work in a touch world, it didn’t in 2002 when gates unveiled the first touch based windows ‘tables’. It didn’t when Ballmer took to the stage at CES weeks before the iPad was officially announced touting Slate computers running windows vista with the promise of Windows  7’s improved touch controls. The surprising thing is that with windows 8 it does, well mostly. To be fair I haven’t had a chance to get my hands on a windows 8 touch based device. I have read reviews and tried it using remote desktop clients on the iPad, but that’s it. So while I know there are some issues with using Windows 8 in a touch only way, these are mostly in the desktop environment and as more Metro style apps are released it will be less of an issue.

What impresses me about windows 8 is that it’s a decisive step into the future of touch first / simpler computing. The world where the masses want to go, even if power users dread it. Microsoft see the writing on the wall, people don’t want complicated computers. They want simple devices that just work, in Microsoft version of the future that will be Windows RT devices.  The problem is that today having access to Metro only apps doesn’t work. There aren’t enough apps and the platform isn’t mature enough.  So you still have windows 8, all the legacy support you expect from Microsoft but it’s build around the new touch centric UI. First thing users switching to windows 8 need to remember is that touch centric works great with the mouse and keyboard. So you get a window into where the future of computing from Microsoft is going but have all the power of Windows 7.

My biggest concern about the the direction that Microsoft is heading isn’t one on UI, The new start menu and metro style apps have great potential. The problem is the App Store, and it’s not just a problem on windows. The Managed app store became popular on Apple’s IOS, nothing can be run on IOS without going through Apples approval process (I know you can jail break and have access unapproved apps, but the number user wont do this). Seeing these kinds of  app stores coming to  OSX and now on Windows has me worried that in the future all applications will need to be approved before they can reach the users. The writing is on the walls, Windows RT has that restriction on it just like all IOS devices. What will stop Microsoft and Apple from restricting running 3rd party installers in the future on their main oses. We aren’t there yet. Right now the App stores represent a safe secure way to distribute your apps, and as long  as they are just one of multiple ways to get on to your hardware they’re great, but if they cross the like to App store only then we have a problem. I should point out that though Microsoft has done this with Windows RT, but that’s has as much to do with the fact that Windows RT runs on ARM chips and software written for x86 chips wont work. It’s when that kind of restriction comes to the x86 processors that we have a problem.

In the end as with all new versions of any software it’s up to the individual user to decided if the upgrade offers enough to be worth the cost. For me personally the enhancements in Windows 8 desktop, and the ability to explore the new world of Metro style apps makes it a worthwhile upgrade. So much so I’ll be upgrading my work computer later this week. I hope to document the process to share next Wednesday.